A Memorable Trip to Sakleshpur

What could a company do for team building in a newly formed team? Conceivably, a party with dance and good food would do the job. However, we did not want just to do the job; we wanted to make it memorable and full of fun. To commence the journey with our newly formed team, Instarama organized its first weekend trip to the Jungles of Sakleshpur. A place around 235 KMs from Bangalore on road. A hill-station covered in absolute calmness and protected in the mountain ranges of Western Ghats, in the state of Karnataka.

Starting the journey on 15th September morning at 5:00 from the office, the vehicle full of enthusiastic travellers halted at the famous food joint at Banashankari for breakfast. After having a zesty South Indian breakfast and a cup of steaming coffee, we stretched out and again boarded the vehicle to complete rest of the journey.

Ibn Battuta rightly said once-“Traveling – it leaves you speechless, and then turns you into a storyteller.” Enjoying the pleasant sites and vast maize farms on the way, we covered about 190 KMs without any fatigue. Thanks to the comfortable recliners in the A.C. vehicle, we could take some power naps, making up for the sleepless night that most of us spent a day before the journey in excitement.

Then we entered the hills of Western Ghats to experience a road journey like never before. It was just the beginning of the adventure. The zigzag roads made sure we do not miss an inch of the wonderful surroundings around us. Fascinated by the enchanted hills and glorious scenery, we entered the forests of Sakleshpur.

As we set out in the forest, heading up to the road to the resort, we sat motionless in our seats, absorbing the scenic beauty that mother earth has to offer us. The mildly brisk air coming on our face through the windows made us feel like there is no pollution in the world.

Suddenly, Raj, who was sitting next to me, proclaimed –“We should buy a land here, make a small cottage, and never leave this place”. I saw it coming and a deep sense of agreement to Raj’s statement on everyone’s face. Sooner, everyone recalled that it is just for the next one day, and we will be back to our cubicles in Bangalore a day after.

Hush! I could see their faces of disappointment. Cursing their life and asking to themselves, “Why I do not belong here? Why I cannot stay in this wilderness forever?

Nevertheless, everyone came out of his or her fascination as we headed deep inside the forest. Flanked by coffee plants from both sides, with clusters of bright red and green berries ready for harvest, we were holding, as we proceed slowly through the narrow path on a big vehicle. The road wounded its way up and down on the hilly terrain, and with paths joining from all directions, we disembark the vehicle a few hundred meters before the resort.

As we walked and reached our destination after covering a path that seemed interesting, we were welcomed by a beautiful waterfall, right in front of the resort.

We reached the destination at about 13:00 hours and what stood in front of us was a spectacular venue where we were about to spend a whole night- Mystic Falls resort. Hungry after the long journey, we were served with superb vegetarian and Non-vegetarian dishes for the lunch.

Then it was a time to buckle up and jump into the natural pond made by the waterfall. While some of us opted to take a walk around and find out interesting places in the resort, few of us chose to take a jump in the water through that rope hanging on a huge tree.

After straying around for a while, it was the time for some team building activities like a game of Cricket, Football, Kabaddi, Mud volleyball, and many other to lighten up the mood. What actually made us test our skills was the Kabaddi match between the two teams. Everyone tried to put in their best, while some of us were exhausted from four consecutive cricket matches that we played before jumping around in the kabaddi match. Everyone played their best and applied the finest possible tricks to get the opposite team down. However, the best team still won the match and was applauded by everyone.

The evening was all set to amaze us, and it was just the start of what we are going to experience in the night covered in the wilderness of Sakleshpur. On request, the resort management took no time to arrange a nice music system with huge speakers for our suddenly planned and self-operated DJ night. The stage was all set; the dim lights were augmenting the mood and we all got our dancing shoes ready to rock the floor. With all the new and popular tracks being played through the cell phones of everyone one after another, everyone put their best foot forward.

In the meantime, we were also being served with delicious snacks, which were fuelling the spirit of excitement and making our sulks go up in the sky. Dead tired from the activities, the dinner was served with the bonfire, and it was the time to turn off the music and enjoy the calm night. Because everyone had to sleep on time for waking up on time to experience what next day was coming with.

A night in the wilderness

It was half past the night and everything just muted. I could hear the nonstop chirpings of the insects, and peacocks breaking the silence as they cooed. The darkness covered the whole forest like a curtain, wrapping everything. The silence was so unprecedented and unnatural for people like us who live in a tier-one city. It was remote and there was no mobile network or television. The only way to connect was to go to the person and talk to him or her personally, not through a WhatsApp message. The quality could have come only after being this far from the urbanity. Cracking entered the smoke of calmness and pushed all of us towards a peaceful sleep.

Gradually, the darkness faded away, though the whiffs of chilly air hanged to freshen us up. One after the other, the surroundings revealed themselves as they peaked out from the inky blackness. In front stood the coffee plantations stretched out for miles on a hilly terrain, scattered with tall trees. As we freshened up, the breakfast was getting ready. After having our breakfast, as planned, we checked out from the resort at 11:00 hours and headed to Manjarabad fort, which was 17 KMs from there. Before that, we took some photographs with the team. 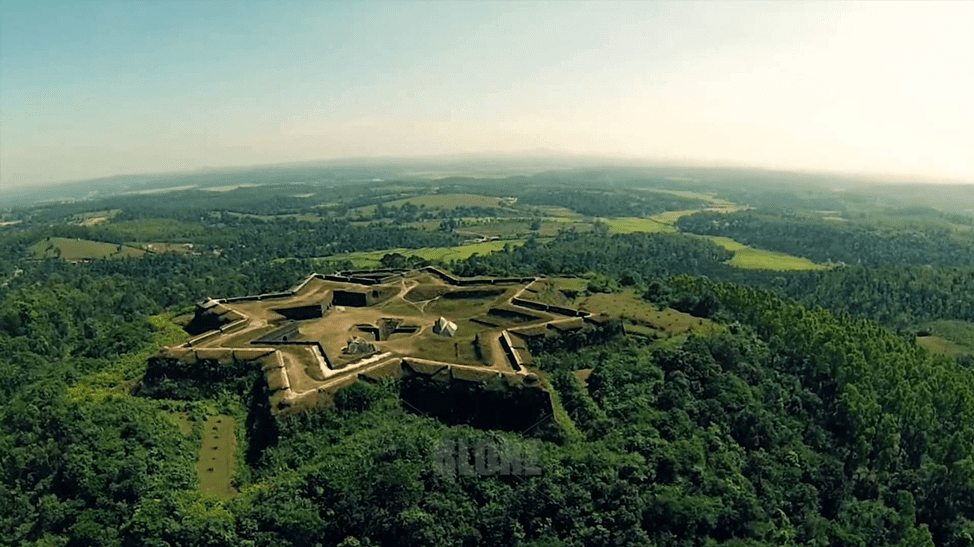 Bidding farewell to the seductive aroma of coffee plantations and a deep forest, we started our journey to the next stop- The Manjarabad fort. We reached the fort after a small journey of 40 minutes through the hilly terrain and then the state highway. The fort is one of the main attractions on the highway out of the town. It is a magnificent example of medieval Indian civil engineering. A star-shaped structure located on the top of a hillock. Covering a path full of stairs, we headed up to the fort from the main road. The sight of the landscape from the corners of the star-shaped architecture is indeed worth the climb, letting you see a peaceful scenic beauty stretched across an unbroken greenery for several kilometers around the fort.

After enjoying the beauty and taking some selfies, we left the place after an hour to board our vehicle and continuing the journey back home. We halted at ‘Sri Krishna Bhavan Veg Restaurant’ for lunch and continued the road journey. Dropping people at their home locations in Bangalore, we reached the office at 7:30 p.m. Then came the Monday- we were back to our cubicles. It was quite visible on our faces, as we were barely able to walk. However, what we experienced on the trip is going to stay in our hearts forever. 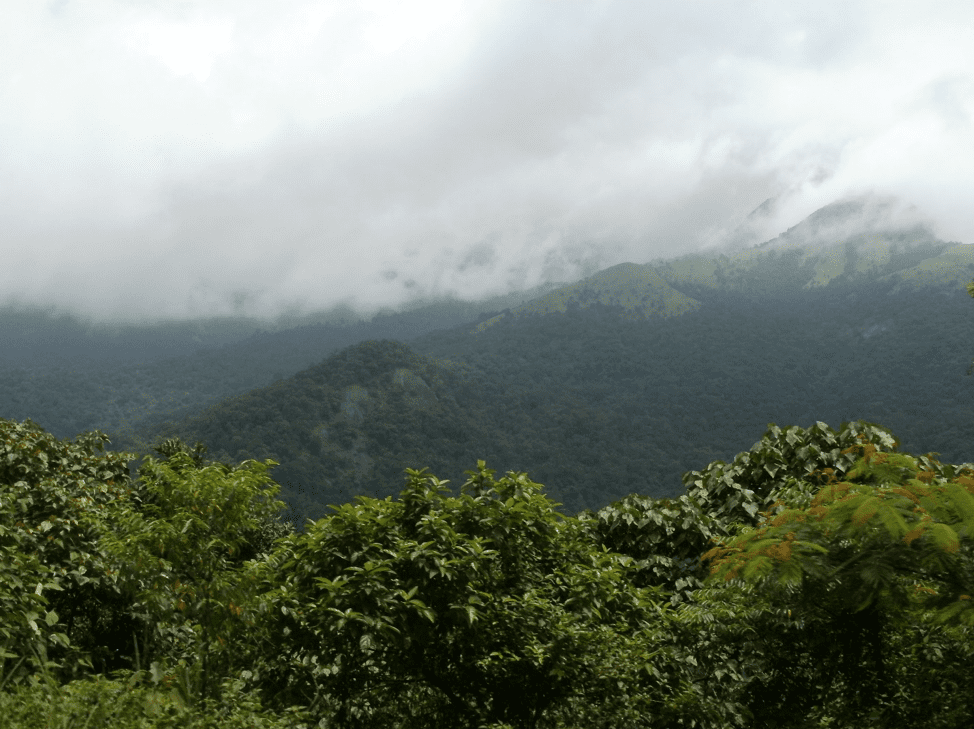 The Sakleshpur trip was a memorable outing for each one of us. We could take a weekend break and see the richest of flora and fauna in its natural surroundings. According to an article in economic times, “Among the three major coffee-growing regions of Karnataka, Sakleshpur is less known and relatively less commercialized for tourists than Kodagu and Chikmagalur. Consequently, it is pristine and real.”

We agree with the quoted line, and indeed believe that its less commercialization has made to it retain the natural beauty. This fact makes the place so wild, remote, amazing, and calm. We could not explore all of its corners due to lack of time but hope to explore it soon in the near future again. This place truly deserves a trip again.